Menoosha is a Singer and Songwriter from Cameroon, Central Africa. She was nominated for a BEFFTA Award in London as ‘Best International Act’ in 2011. Her single ‘Talk to me (Sweet Thing) from the album ‘Satellite Brown Chick’ reached #14 on the UK Soul Charts in February 2017.

Her project band ‘Menoosha & Friends’ is a formation of high quality international musicians and can be booked for all occasions (corporate events, galas, weddings and other private parties). They are mostly active in Germany but also play across Europe and worldwide. Styles include Soul, R&B, Gospel, Funk, Jazz and Afro with a touch of Pop. 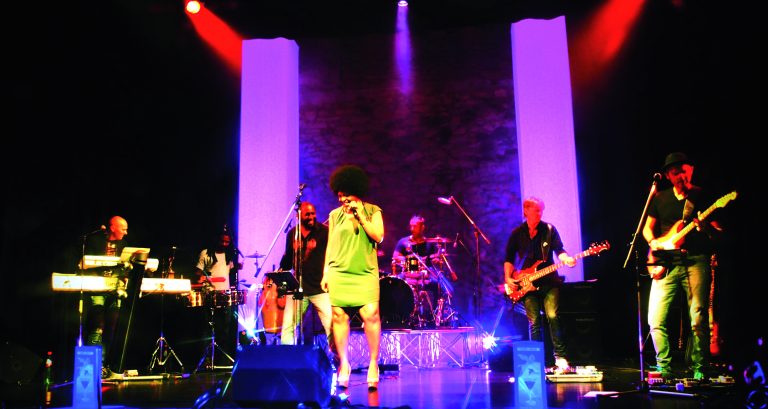 Growing up in Abidjan (Ivory Coast), she was introduced by her parents and her singing aunt Bebe Manga to ‘les Oiseaux du Monde’, a local children’s choir and dance group led by Jean-Claude Gigot that achieved national fame through TV shows and tours throughout Africa. They opened for Stevie Wonder and Kool & the Gang in 1988 at a N’Daya International, a benefit gala in Abidjan (Ivory Coast). This laid her musical foundation.

She moved to Germany as a young adult to study Communication Design and grabbed this chance to build a career as a soloist. She started off working with dynamic bands in Germany and France, touring internationally.

She completed an international tour with Housepacific records throughout Europe and Asia while releasing a single with swiss DJ Christian Hornbostel ‘Do it again’ in 2008. Her solo projects include also include:
– ‘Givin it up’, a single released on the Best of Mercedes Benz Mixed Tapes in 2007.
– ‘Movin as One’, the official single for the Skoda Superb automobile in 2008.
– ‘Three Piece Suite’, a Rock & Soul EP also released in 2008.
– ‘Satellite Brown Chick’, First album released in 2010 and January 2017.
– ‘Ekong Eyeseh (Our Love)’, an Afro-Soul single released in September 2017.

In 2019, Menoosha launched the production of her second album, ‘Airs About Hair’, a concept album about Hair, Love and Life. What sparked the inspiration for such an album? Hair loss due to personal tragedies and treatment differences in the professional world based on how she chose to wear her hair. The project is an collection of hair stories, statements and declarations from a personal perspective. Airs About Hair, Vol. 1 was released on November 27th on Bandcamp and December 9th on all platforms, and earned the following:
– Artist of the Week on UK Urban Influencer
– Album of the Week on the Jazz Funk Soul Radio
– Peaked at #5 on the Grenada Soul Chart and #4 on the UK Soul Chart Breaker Show.

In her spare time, she is very passionate about Women’s Empowerment and heavily supports the ‘Phenomenal Women Empowerment Stage‘, a Women4Knowledge initiative to encourage African Fempreneurship.